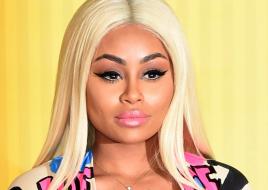 Blac Chyna has apparently Rob Kardashian and his home with their baby daughter after her private texts were leaked on social media.

The pair, who welcomed their child five weeks ago, encountered serious family drama over the weekend after Chyna's social media account was hacked with photos of her private text messages.

Chyna claimed Rob Kardashian was to blame and hours later the Kardashian brother said his fiancee had left their home with Dream and cleaned out their rooms.

"Chyna knew exactly what she was doing to get me. I can't believe she did this to me," Rob tells his fans. "And this isn't for some ratings this is my real life so please understand I'm just being open right now."

"Cuz if it was for ratings I wouldn't explain all this here. And with Chyna's messages and her leaving with everything and the baby I am broken."

"I gave everything I owned for her. Didn't know I was just part of her plan. I really believed she was in love with me the way that I was with her and I am so hurt and never felt this before."

"This wasn't fake or some publicity stunt. Trust me. This is all very real in my life. I don't play when it comes to my woman and my baby."