Billy Ray Cyrus and His Wife File For Divorce Again 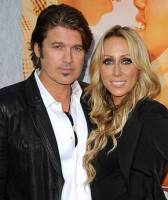 )' parents have filed for divorce after 19 years of marriage.

Billy Ray Cyrus and Tish say "this is a personal matter and we are doing what is in the best interest of our family."

In her divorce petition, Tish is asking for spousal support and primary physical and legal custody of the couple's 13-year-old daughter, Noah.

Miley is one of the couple's three children together, not including two stepkids Cyrus adopted from a previous relationship.

This isn't the first time the two have asked for their marriage to be ended. In October 2010, the pair filed for divorce citing irreconcilable differences.

However, five months later, Cyrus said they had dropped the divorce and "things are the best they've ever been."

The dad has apparently also been ignoring his singer-actress daughter's phone calls.