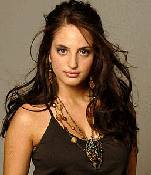 ), has been hospitalized after she took eight pills.

Alexa Ray was found at her Manhattan apartment by paramedics after a friend frantically called 911 saying Joel the 23-year-old had taken several pills.

Police don't know yet exactly what she ingested or whether it was intentional. But there is evidence that it may have been attempted suicide because the friend said she "was feeling despondent" and "wasn't feeling good about herself."

She is currently in hospital in stable condition and receiving treatment.

According to the 'New York Daily News', Alexa Ray has been an emotional wreck since breaking up with ex-bandmate Jimmy Riot a few years ago and has "battled depression."

In an August posting on her MySpace page, the aspiring singer listed her mood as "forgotten" and complained about her how hard it was to meet someone.

"I HATE going out!!" she wrote. "I'm a homebody and a workaholic. I don't like going out and drinking to meet men!!! I always have to drag myself out the door to get up the motivation to go out, and when I do go out, I don't meet anybody!!!"

"I live in the greatest city in the world and I can't seem to meet an interesting guy who also happens to be NICE."

Coincidentally, it won't be the first time a Joel has attempted to suicide -- and with eerily similar motivation behind it.

Billy Joel revealed to 'Details' magazine last year that before he became a famous musician, he swallowed furniture polish in a bid to bite the dust.

"I was suicidal," said Joel. "I was 21. It's a tough age. Things hit you really hard. A relationship with a girl had ended and I was devastated, and then it didn't work out with the recording we did, and I just figured the world didn't need another failed musician."

"You take yourself so seriously - you've got your head so far up your ass you can't see straight."