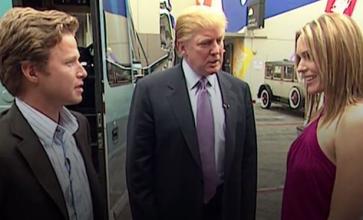 Billy Bush appears on 'The Late Show' with Stephen Colbert to confirm the authenticity of the infamous 'Access Hollywood' tape, which Donald Trump has recently begun to question.

"I would also like to say that's not me on the bus," jokes Bush. "You don't get to say that because I was there and the last 14 months of my life I have been dealing with it. You dealt with it for 14 minutes and went on to be the President."

"You can't say that. That is your voice. I was there. You were there," he says to Trump. "That's your voice on the tape."

"Then you've got 20 women who used their names. We've got powerful people being held accountable now, and sometimes there's anonymous sources -- all of these women came out with their names and told their detailed accounts."

"When he said this it infuriated me on a personal front and then I ended up googling and I read an article with all of these women's accounts because when that article first came out, it was 13 days after I had been fired, so I was in my own personal shock, fight or flight and so I never really read it all the way."

"And as I read these I said 20 women don't get together and say 'Hey, you know what would be really fun, let's take down a powerful guy together.' No, they don't."

"You're reopening wounds on them too. Enough's enough. Stop playing around with people's lives. That upset me."

Bush said he didn't take Trump's remarks seriously on the bus, until he read some of the accounts by the women.

"If I had thought this was a man detailing a sexual assault strategy, I would've called the FBI, not just my executive producer."