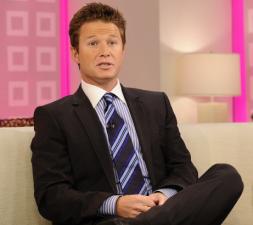 Billy Bush is breaking his silence about Donald Trump and the now infamous 'Access Hollywood' tape in an interview with THR.

"It's been a roller coaster. If you start from the day everything happened, Friday, Oct. 7, it was just instant shock. Things were happening way too fast, and a media circus developed. I've never been the type that the paparazzi would be interested in."

"So that early part was just chaos. But then things progressed, and when you have a big, traumatic event, you go through stages, and it led to acceptance and understanding. And then I found myself in a place of soul searching. And I developed a commitment to become a better, fuller man."

Bush reveals he thought the furor over the tape would subside.

"I thought that we would work through it and we would address people. I put together an apology right away, the one you saw; I told people that I was ashamed and embarrassed. And I was. So in the beginning, I thought, 'OK, we'll go and own up to this moment.'"

"Then I got home, and it started to become apparent that I wouldn't be returning to Today. It hurt a lot, and I fell apart. But I had to put aside those feelings and get through legal things. I never had a legal team; I had never had a publicist before."

But Bush says it really hit home when his daughter, he shares three daughters with Sydney Davis, asked him why he was laughing at the vulgar "locker room talk," as described by Trump.

"My 15-year-old, Mary, called me from boarding school, and she was in tears. And she said, 'No, why were you laughing at the things that he was saying on that bus, Dad? They weren't funny.' It hit really hard."

He says when the interaction occurred, it was "the second season of The Apprentice... he was the biggest star, not just on the network with which Access Hollywood is affiliated but on TV, period... if we could get him three times a week in exclusive-type situations, he was always going to say something that was headline-worthy."

"Looking back on what was said on that bus, I wish I had changed the topic. I wish I had said: 'Does anyone want water?' or 'It looks like it's gonna rain.' He liked TV and competition. I could've said, 'Can you believe the ratings on whatever?' I didn't have the strength of character to do it."

Bush says since the scandal seven months ago he hopes he's grown: "I have changed in a way that I think will make me better at my job."

He left after 'Today' after reaching a settlement with NBC in October.