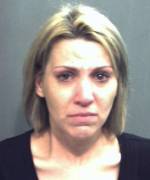 Billy Bob Thornton's estranged daughter has been sentenced to 20 years in prison for killing a child in her care.

Amanda Brumfield, the actor's eldest child, was convicted of the aggravated manslaughter death of her goddaughter, 1-year-old Olivia Madison Garcia, who died during an overnight stay in her home.

Brumfield said that the girl fell out of her playpen and hit her head, but prosecutors had argued the skull fracture and brain bleeding were no accident and wanted her to face a murder charge since she did not call for help for more than two hours and found inconsistencies in her story.

Outside the courtroom, the child's mother, Heather Murphy, said no sentence could bring back her daughter but "it more than I expected. I feel justice has been served."

Brumfield is the oldest of five children of the 55-year-old actor, who has been married five times.