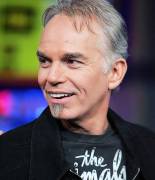 During a game of 'Would You Rather' backstage at the Golden Globes after accepting his award, Billy Bob Thornton revealed there's one woman on his list who can't be topped.

When asked to pick between Reese Witherspoon and Jennifer Aniston (photos

Then asked whether it would be Keira Knightley (photos

"How many times does it take you to get this through your head?!"

The actor took home the award for Best Actor in a Miniseries for his role in 'Fargo'.

Ironically, after accepting the award, Thornton said: "These days you can get in a lot of trouble no matter what you say, you know what I mean?"

"You can say anything in the world and get in trouble. I know this for a fact. So I'm just going to say thank you!"