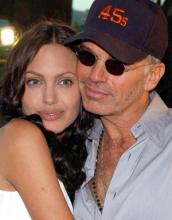 ) -- including the vials of blood they both wore around their necks.

"I mean it was a crazy time. I've never been fond of it," the told students at Loyola Marymount University's School of Film & Television in California.

"The vial of blood is very simple. You know those lockets you buy that are clear and you put a picture of your grannie in and wear it around your neck? She bought two of those."

"We were apart a lot because she's off making Tomb Raider and I'm making Monster's Ball. She thought it would be interesting and romantic if we took a little razorblade and sliced our fingers, smeared a little blood on these lockets and you wear it around your neck just like you wear your son or daughter's baby hair in one. Same thing."

"From that, we were wearing quart jars of blood around our necks. And we were vampires and we lived in a dungeon."

"I mean, it had some basis in fact. We had a basement which I had a recording studio in. So when I tell a journalist I stay down in the dungeon all the time, you know, recording music, they don't hear 'recording music,' they hear 'dungeon,'" he explains. "You know, because it makes a better story."