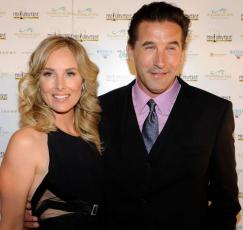 With President Donald Trump weighing in on the allegations against Senator Al Franken, Billy Baldwin is speaking out about an encounter with him.

This after Donald Trump Jr. shared an article chronicling the sexual misconduct allegations against Al Franken.

"Your Dad is a 5th degree black belt when it comes to sexual impropriety allegations," he responded bluntly.

"In fact, I once had a party at the Plaza Hotel... your father showed up uninvited & hit on my wife... invited her on his helicopter to Atlantic City."

"She showed his fat ass the door," he said.

"Think that's good... wait till I tell you about doing scenes in acting class with Marla Maples (terrific person!!) in the late 80s."

"It was before Ivana or the press even knew. We rehearsed in her apartment & Donny Boy would call every 20 mins to check up on us."

He added the hashtags "#VeryInsecureDude" and "#TrumpRussia."

Of course, Trump faced similar allegations of his own after a 'Access Hollywood' video surfaced during the election campaign in which he bragged about grabbing women by their genitals and getting away with it because he was a "star."