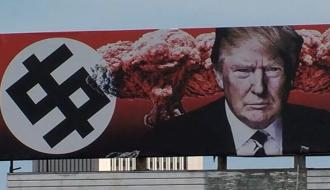 A billboard featuring President Donald Trump surrounded by mushroom clouds and swastika-like dollar signs has gone up in downtown Phoenix.

The owner of the billboard, which also includes a Russian flag on Trump's lapel, says she plans to keep it up on Grand Avenue as long as Trump is president.

"Some of these issues are so important you can't not speak out," Phoenix resident Beatrice Moore tells 12 News.

The artist who created the billboard for Moore says: "I think a lot of people are feeling this way and I'm just trying to express what I think is on a lot of people's minds these days."

"Something that really concerned us was this idea of a dictatorship where things were going in a certain direction."

Moore says she has received death threats over the menacing Trump billboard.