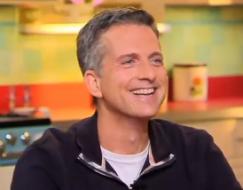 Bill Simmons is admitting that he went too far with the Roger Goodel in which he called the NFL commissioner a liar and dared ESPN bosses to suspend him.

The September 2014 rant spelled the beginning of the end for Simmons, who had worked at the network for 15 years, at ESPN.

The network also recently shut down 'Grantland', the sports blog founded by him but operated by ESPN.

"A couple of my people were texting me, like, 'Hey man, you want to listen to it before it goes up? You got pretty into that one,'" Simmons explained on his podcast.

"And the good thing about podcasts is you can touch the rail, and if you realize that you touched it and get electrocuted, you go, 'Yeah, we should take that out.' And we did that a bunch of times. But the irony of what happened with that podcast was when I did it, I was mad about a lot of stuff that was going on behind the scenes."

"I was working my butt off. I was about to do a six-hour taping session with Jalen Rose. So we were about to be in a studio for six solid hours. I had done that podcast that day and I went right from the podcast to the studio to do six straight hours."

"And I never listened to it. If I had heard it, I would have said, 'You know what, that doesn't sound — I don't think that's worth it. We should take that out.' I would have taken it out."

"We should have had a meeting about it. And I was in a room with Jalen for six hours. It's almost like when you watch a baseball game and somebody makes an error and they lose the game. And you think, 'Maybe that error was a symptom of something bigger.'"

"And in our case, I was overworked, and I should have listened to that podcast, and I was doing too many things, and we should have taken our time with it, and we didn't."

But he added: "I stand by everything I said about him. I thought he was lying. It was borne out correct: The guy did lie."

"I had 50 people working for Grantland... and if I'm going to push the envelope like I did, first of all, you got to know where the line is because the last thing I want to do is put all those people in a bad spot." he said.

"And secondly, as a staff, we should have realized, hey, is this worth it. That really set the tone for just a really bad next eight months. It was always heading a certain way after they suspended me."

Author Malcolm Gladwell, who was Simmons's guest, didn't think the reaction should have been that harsh.

"It's not like you're criticizing the pope here," he said. "You were bringing up that point in the context of a very legitimate argument about how the NFL treats its players in response to allegations of misconduct."

"If you can't have free discussion about that, what's the point of being a sports journalism network?"