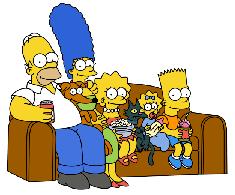 Animator Bill Plympton does his third opening sequence for 'The Simpsons' on this Sunday's episode titled 'Married To The Blob'.

This is Plympton's third cough gag for the series with his other openers being in each of the last two seasons.

In the episode, Comic Book Guy realizes his comics are nothing if he can't share them with anyone after he meets Kumiko, a Japanese woman writing an autobiographical manga, and gets Homer's advice on how to befriend her.