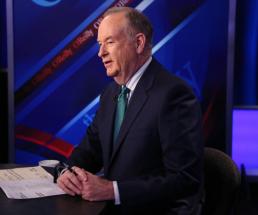 Bill O'Reilly is taking a vacation from his Fox News Channel show amid the sexual harassment controversy that has led to sponsors fleeing 'The O'Reilly Factor'.

At the end of his broadcast on Tuesday night, O'Reilly made a point of saying it was a pre-planned vacation but the timing is certainly extremely convenient for the television personality.

In fact, there are questions about whether he will ever return from the "vacation."

"I grab some vacation, because it's spring and Easter time. Last fall, I booked a trip that should be terrific," he said.

"If you can possibly take two good trips a year, it will refresh your life," he advised viewers. "We all need R&R. Put it to good use."

With more than 80 advertisers distancing themselves from the show, paid ads on the 'The O'Reilly Factor' have been cut by more than half.

Bill O'Reilly, who is reportedly off to Italy and the Vatican, said he plans to return to the air on April 24. The Murdoch's are expected to decide his fate in the interim after the results of an investigation.