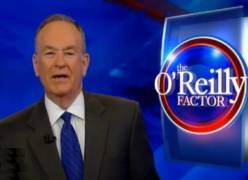 Five days after being fired from Fox News Channel, Bill O'Reilly expressed his dismay and vowed that "the truth will come out."

"I am sad that I'm not on television anymore," he said on his paid 'No Spin News' podcast. "I was very surprised how it all turned out."

O'Reilly, who was forced out amid sexual harassment allegations, cryptically added he couldn't say more "because there's much stuff going on right now."

"I can't say anymore, because I don't want to influence the flow of information. I don't want the media to take what i say and misconstrue it."

He claimed he was "working in that direction" because his audience had a right to know.

"Look, I was there for 20 years and six months, and we made history. Put cable news on the map. We were successful all that time. No ebb and flow, just straight up graph. And so, that vehicle was fabulous for me, and I said in the beginning that I'm sad, but why wouldn't I wish them the best? They were there, we performed well for them, and that's the fact."

O'Reilly didn't say where he would eventually land but added he had planned to make his online program into a "genuine news program."