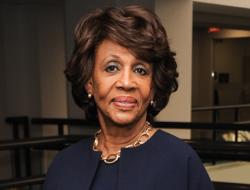 Bill O'Reilly has apologized after facing backlash for mocking congresswoman Maxine Waters with his "James Brown wig" comments on 'Fox and Friends' Tuesday.

After watching a clip of Waters going after President Trump on the program, O'Reilly remarked: "I didn't hear a word she said. I was looking at the James Brown wig."

"I didn't say she wasn't attractive," O'Reilly replied. "I love James Brown. But it's the same hair James Brown had."

"She's a sincere individual. Whatever she said, she believes, and that's old-school. We're giving Maxine a break here. I love you, Maxine."

The congresswoman appeared on MSNBC later in the day to respond to the host.

"I'm a strong black woman and I cannot be intimidated. I cannot be undermined," Waters said on 'All In' with Chris Hayes.

"I'd like to say to women everywhere: don't allow these right-wing talking heads, these dishonorable people to intimidate you or scare you. Be who you are, do what you do, and let us get on with discussing the real issues of this country."

Following the appearance, the 'O'Reilly Factor' host issued his apology in a statement: "As I have said many times, I respect Congresswoman Maxine Waters for being sincere in her beliefs. I said that again today on Fox & Friends calling her 'old school.' Unfortunately, I also made a jest about her hair which was dumb. I apologize."