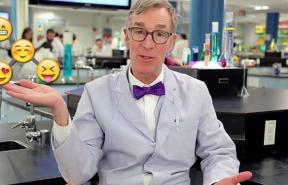 Bill Nye will host a new series in which he aims to dispell myths and refute anti-scientific claims.

Each episode of 'Bill Nye Saves the World' will tackle a different topic in which the former Science Guy will talk to guests about the subject, conduct experiments and ultimately lead to a conclusion.

"Since the start of the Science Guy show, I've been on a mission to change the world by getting people everywhere excited about the fundamental ideas in science," Nye explains. "Today, I’m excited to be working on a new show, where we'll discuss the complex scientific issues facing us today, with episodes on vaccinations, genetically modified foods and climate change."

"With the right science and good writing, we’ll do our best to enlighten and entertain our audience. And, perhaps we'll change the world a little.”

The Netflix series will be Nye's return to television after 'Bill Nye the Science Guy', which aired from 1993-1998, wrapped up.

In recent years, Nye has become more outspoken about his beliefs and once again made himself a part of the conversation.