Bill Hader To Return To 'Saturday Night Live' As Host 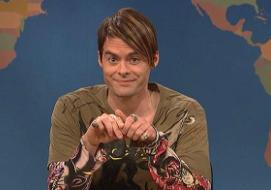 Hader, who was a castmember for eight seasons, will host the October 11 episode of the sketch comedy. He left the show in 2013.

Fans will be eagerly tune in hoping Hader reprises Stefon, his most famous SNL character.

As previously announced, Chris Pratt will kick off the season on September 27 with musical guest Ariana Grande (photos

) and Maroon 5 the following week.