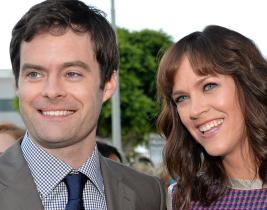 Bill Hader and Maggie Carey are going their separate ways after 11 years of marriage.

The former 'Saturday Night Live' star and writer-director Carey, who have three children together, have reportedly been living apart since July.

When he left the NBC series in 2013 after eight seasons, Hader back to the West Coast because he wanted to spend more time with his family rather than living in New York while his wife directed and wrote in Los Angeles.

"The whole reason we’re moving to California is that we're tired of being apart all he time," he told USA Today at the time.

"Doing SNL was a huge time commitment. You'd have weeks off and you'd have to go to L.A. It's about rolling with the punches."