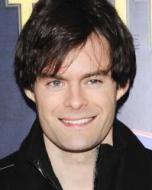 Bill Hader does a rather entertaining impression of '60 Minutes' correspondent Bob Simon in an appearance with Seth Meyers on 'Late Night'.

The impression never made the broadcast of NBC's 'Saturday Night Live' but Hader recalls the details that would've made the sketch.

The actor-comedian also reveals that he had no idea who Eliot Spitzer was when he was first asked to do an impression for the cold open of the show.