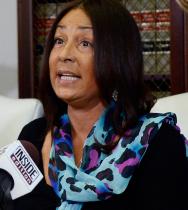 Although prosecutors had sought to have 13 accusers as witnesses at trial, Johnson is one of only two accusers who were allowed to testify by Judge Steven O'Neill.

In her testimony, Johnson tearfully described how Cosby allegedly drugged and sexually assaulted her in Los Angeles in 1996.

She said she first met Cosby in the early '90s, when working as an assistant to his agent.

Johnson said Cosby invited her to lunch at the Bel Air Hotel one day to "discuss my life my career."

"Those are the kinds of conversations we'd have," she said. "He'd call and ask me about my life like in a fatherly, Dr. Huxtable kind of way."

But at the last minute, Cosby changed the location to a private bungalow instead of the hotel dining room.

When he answered the door, he was wearing a bathrobe and slippers.

"I thought it was a little odd," she said. "I thought he’d get dressed then we'd go and have lunch as planned."

But Cosby had other plans and offered her wine and water and told her she needed to "relax."

"There was a large white pill in the palm of his hand. He was offering me the pill to take and I said, 'Oh no. I'm fine. There was a little back and forth with him telling me I needed to relax. And me saying, 'No. I'm fine.'"

"He said, 'Would I give you anything to hurt you? Trust me. It'll just help you relax.'"

She finally agreed to take it because she felt pressured but only pretended to swallow it.

"He handed me a glass of wine and he leaned forward and said, 'Open your mouth. Lift up your tongue'. And I did. And there it was."

Johnson said soon after swallowing it: "I felt like I was under water."

The next thing she remembered was waking up in Cosby's bed.

"My dress was pulled up from the bottom and it was pulled down from the top and my breasts were out and I felt naked," she said. "But the dress wasn't off of me."

"I could see a bottle of lotion on the corner of the nightstand," she cried. "He put lotion in my hand … and he made me touch his penis."

She never saw Cosby again but before she was fired heard him telling her boss that: "She's messing up her work. She's a problem. This is a problem. You need to get rid of the problem."

Cosby, 79, is on trial for allegedly drugging and sexually assaulting former Temple University employee Andrea Constand. He has plead not guilty to the charges.