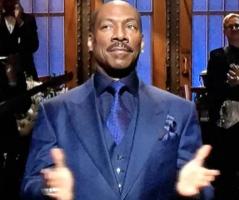 Bill Cosby is thanking Eddie Murphy for refusing to play him in a sketch on the 'Saturday Night Live' 40th Anniversary Special this past weekend.

This after Norm McDonald revealed that Murphy was to play Cosby in the 'Celebrity Jeopardy' sketch but he became uncomfortable at the last minute and decided not to do it.

A Video Daily Double question on Favorite Cocktails would have brought up clip of Murphy as Cosby behind a bar.

"When he speaks, he is Cosby. Eddie Murphy doing a perfect Cosby impression. The audience does not let him finish. The sketch ends."

"So, the talks were underway. Eddie says 'maybe it's ok since he's doing pre-allegation Cosby'. We talk in his dressing room a good hour. When it's over, I'm convinced he'll do it. He doesn't."

"He knew the laughs would bring the house down. Eddie Murphy knows what will work on SNL better than any one," he explained. "Eddie decides the laughs are not worth it. He will not kick a man when he is down."

The sketch obviously still happened but with Kenan Thompson instead of Murphy.

"Eddie Murphy, I realize, is not like the rest of us. Eddie does not need the laughs," Macdonald added. "Eddie Murphy is the coolest, a rockstar even in a room with actual rockstars.

Cosby, now getting wind of the star's decision, has released a statement to thank him.

"I am very appreciative of Eddie and I applaud his actions," says the embattled comedian facing sexual assault allegations.