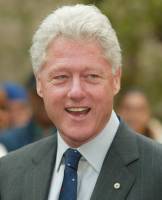 Stephen Colbert asks former President Bill Clinton, aka the great explainer, to explain why Bernie Sanders and Donald Trump are performing well in the polls.

Clinton also says he didn't encourage Trump to run, as has been reported, and was just returning the real estate mogul's phone call.

"I get credit for doing a lot of things I didn't do like that," says Clinton.