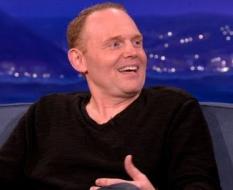 "I have no problem with any of his behavior," the comedian said on Conan. "If I was his age, and you know I had a Ferrari, a Lamborghini, every check out there wants to bang you, how are you supposed to behave?"

"Limos? He has a limo driver at 19 and he's not going to a prom. He's going to an arena where everyone is screaming his name. His behavior is completely normal."

"The only thing I didn't like was that shot where he was playing hoop," Burr said of a photo the singer recently shared where he gives an angry look to the camera after making a basketball shot.

"I just didn't he hit a 12 footer and then he looks up and he's glaring at the camera. Like I said he didn't do it or something. I never saw Jordan do that. Like he just did something. It didn't even look like the net was regulation."

"He was playing with his black friend who he's playing to lose. If that dude wins, he's out of the entourage and he has to get a job."

"I was just watching it having empathy for him. Going that's what I would be doing. I'm surprised he's not doing blow. That's what I would've done. And then I get that look and I'm like, you know what, F this guy."

"But he's going to look back like I shouldn't have done that. He's 19 years old. I'm rooting for him."

Burr also talked about his dislike for Super Bowl parties.

"No super bowl party," he explained. "If you're a true Super Bowl fan then you don't go to any Super Bowl parties because it's all a bunch of losers who don't watch it all year."

"And what they do is they talk during the game and shut up during the commercials."