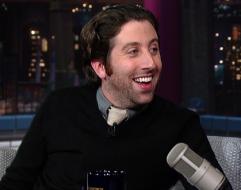 In an appearance on the 'Late Show with David Letterman', 'Big Bang Theory' star Simon Helberg recalled how autocorrect gave his family a scare during the birth of his daughter.

"Well, we attempted to do that," Helberg said of his wife's decision to have a home birth. "I was very apprehensive about that because I'm a bit neurotic."

"I just was picturing it hurdling on the kitchen table and me churning butter," he laughed.

Asked why he needed the butter, Helberg replied: "I can't say that on TV."

"It got to a point where we had to transfer to the hospital because the baby, on the way out, had gone to the bathroom. And that's an immediate transfer."

"I'm in charge of communicating with her family. So I have to text them and I'm like they're going to go crazy. So in all caps I said 'Not an emergency. Nothing to worry about. Everything's fine. It's just that were going to the hospital because the baby popped'. Send. It autocorrected the word."

"Well, they were googling baby popping! Yeah, I'll be at the Chevron patching her up again!"