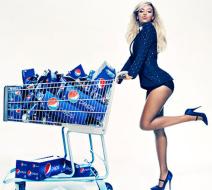 Beyonce has topped Forbess' list of top 100 celebrities for 2014, beating out the NBA's LeBron James and Oprah Winfrey

The list ranks the most powerful celebrities in film, TV, sports and music.

And while Beyonce tops the list, she's not the highest earner on it.

That honor goes to Dr. Dre -- whose deal with Apple made him the highest earner in the list with a whopping $620 million.

The list is evenly split between the sexes with five men and five women. Although interestingly, Robert Downey Jr. is the only movie star to crack the top ten.

The top ten celebrities according to Forbes, with their estimated earnings in the past year are: