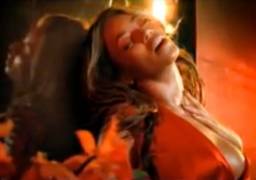 )' ad for her 'Heat' perfume has been deemed too hot for daytime TV in the UK.

The UK Advertising Standards Authority has ruled that the ad, which opens with Beyoncé in a bathtub then features the singer writhing against a bathroom wall in a barely-there red dress that threatens to slip off, must not be shown until after 7:30 PM.

"We considered that Beyoncé's body movements and the camera's prolonged focus on shots of her dress slipping away to partially expose her breasts created a sexually provocative ad that was unsuitable to be seen by young children," they say in a statement.

However, they did rejected a separate series of complaints that the ad was "sexual content."

"The ASA noted that there was no explicit sexual content and that the singer Beyoncé was not fully naked in the ad," it adds. "Although we noted the ad was sexually suggestive and might therefore be distasteful to some."