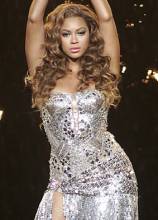 ) says she has already donated the $1 million she earned performing for Libyan dictator Muammar Gaddafi to charity.

The singer, who performed with Usher at a 2009 New Year's Eve party in St. Barts, says he gave the money away after finding out it was linked to Gaddafi.

"All monies paid to Beyoncé for her performance at a private party at Nikki Beach St. Barts on New Year's Eve 2009, including the commissions paid to her booking agency, were donated to the earthquake relief efforts in Haiti, over a year ago," says her publicist.

"Once it became known that the third party promoter was linked to the Gaddafi family, the decision was made to put that payment to a good cause."

A spokesperson for the Clinton-Bush Haiti Fund confirmed that Knowles donated the sum to the foundation last year, following the country's devastating earthquake.

Canadian singer Nelly Furtado announced earlier this week that she planned to donate the $1 million she received to perform a 45-minute show for the Gaddafi family and friends in 2007.

There has been no word from Mariah Carey (photos

) and Usher, who also performed for the dictator.