Beyonce Admits Lip-Synching Then Belts Out National Anthem At Conference 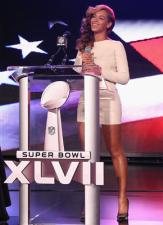 After admitting to lip-synching the national anthem at President Obama's inauguration, Beyonce tried to silence critics by giving an unexpected performance of 'The Star Spangled Banner' at a Super Bowl press conference in New Orleans on Thursday.

Wearing a tight, cream mini-dress, the 31-year-old Grammy winner addressed the issue as soon as she took to the podium and sang the national anthem with no accompanying music and no pre-recorded backtrack.

"I am a perfectionist," she said. "And one thing about me: I practice 'till my feet bleed."

"I did not have time to rehearse with the orchestra," she said of the inauguration. "It was a live television show. Due to the weather, due to the delay, due to no proper sound check, I did not feel comfortable singing live."

"It was about the president. I wanted to make him and my country proud so I decided to sing along with my pre-recorded track. And I'm very proud of my performance."

As for whether or not she'll be singing live on Sunday, during the Super Bowl halftime show, Beyonce said: "I will absolutely be singing live. I'm well rehearsed. This is what I was born to do."