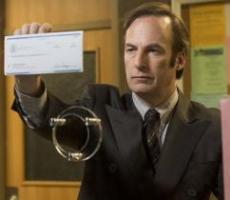 Now that 'Better Call Saul' is well into development, AMC is providing real details on the project that will see Bob Odenkirk reprise his 'Breaking Bad' role of Saul Goodman.

"The series is set six years before Saul Goodman meets Walter White," the network says. "When we meet him, the man who will become Saul Goodman is known as Jimmy McGill, a small-time lawyer searching for his destiny, and, more immediately, hustling to make ends meet."

"Working alongside, and, often, against Jimmy, is 'fixer' Mike Ehrmantraut (Jonathan Banks). The series will track Jimmy's transformation into Saul Goodman, the man who puts 'criminal' in 'Criminal lawyer.'"

"The series' tone is dramatic, woven with dark humor," it adds.

"We could've made the deadline, but I am slow as mud as a TV writer. We have a way of doing things that is slower than most episodes. We average three weeks per episode. We want to think things through, and it pays dividends."