Bette Midler While Being Played Off Tonys Stage: 'Shut That Crap Off' 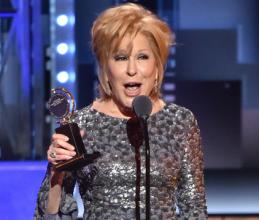 Bette Midler didn't appreciate being interrupted while accept the 2017 Tony Award for best actress in a musical Sunday night for her performance in 'Hello, Dolly!'.

"I'm so privileged, I'm so honored," Middler said in her speech. "I hope I don't cry. Thank you to the Tony voters, many of whom I've actually dated."

"I'm so grateful for the outpouring of love and affection — I can't remember the last time I had so much smoke blown up my ass, but there's no more room."

The continued until the orchestra began to play her off the stage.

The legendary actress had never won in an acting category before at the Tonys.