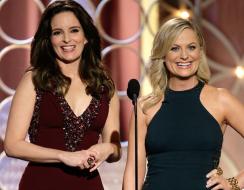 Hosts Tina Fey and Amy Poehler opened the Golden Globes with a series of punch-lines that simultaneously praised and skewered some of the nominees because, as Fey said, "this is Hollywood, and if something kinda works they'll just keep doing it until everybody hates it."

Read some of their best jokes below, let's start with one about 'Gravity; that we thought was particularly funny: "It's the story of how George Clooney would rather float away into space and die than spend one more minute with a woman his own age."

"The Wolf of Wall Street shocked viewers by using the F-word 506 times in three hours," said Fey. "Which is the new record. Unless you count my dad trying to hang some curtains rods in our living room."

"Matthew McConaughey did amazing work this year. For his role in Dallas Buyers Club, he lost 45 pounds. Or what actresses call being in a movie," quipped Fey.

"Now, a number of big movies used prosthetic genitals this year. Blue Is the Warmest Color, The Wolf of Wall Street, Saving Mr. Banks. Yes, a lot of people don't know Tom Hanks was wearing one the entire time," joked Poehler. "He's wearing one right now actually, he's really enjoying it. He's so happy about it!"

"Meryl Streep is so brilliant in August: Osage County, proving that there are still great parts in Hollywood for Meryl Streeps over 60," said Fey of the actress' prowess.

"Many of our SNL friends did great work this year. Will Forte, Andy Samberg. You might know Andy from his hit song, 'I'm on a Boat.' Which this year was adapted into the Tom Hanks film Captain Phillips," said Poehler.

"Before earning a Golden Globe nomination for his first ever acting role in Captain Phillips, Barkhad Abdi was working as a limousine driver in Minnesota. There's such a beautiful life lesson here, everyone: Sleep with your limo driver tonight," advised Poehler. "Before he gets famous."

"Woody Allen is the recipient of this year's Cecil B. DeMille Award, just a few years after Martin Scorsese won it," said Poehler. "I assume the award is for tiniest man who wears glasses."

"Masters of Sex is the degree I got from Boston College," quipped Poehler of the nudity and sex filled drama.

Another joke that the duo made that wasn't in the monologue but deserves special attention was as they welcomed Leonardo DiCaprio on stage: "And now, like a supermodel's vagina, let's all give a warm welcome to Leonardo DiCaprio."

The joke, about DiCaprio's choice in women, even got a thumbs up from Leo as he walked towards the microphone.