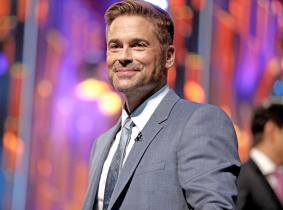 The Comedy Central Roast of Rob Lowe aired on Monday night and we've compiled the best jokes from the night.

As we mentioned last week, conservative author Ann Coulter -- who was at the event -- was often the target of the roast whenever Lowe wasn't.

"Our younger audience might now know who Rob Lowe is. So kids, this is who your mom thinks about when she’s f—ing your dad." quipped David Spade.

"Rob Lowe," said Pete Davidson, "or as gonorrhea patients call him: Patient zero. People call Rob Lowe a bad actor, but that's because they never saw him tell his wife he didn't f—-k that nanny."

"Rob, you’re a good friend and a good man and I can't wait to see what failed pilot we’re going to do next year," joked Riggle

The Ann Coulter jokes kept coming throughout the event.

"Is Pete white? Is he black? Ann Coulter needs to know so she can decide if she hates him," laughed Spade.

"Ann Coulter, if you're here who's scaring the crows away from our crops?," asked Davidson. "Last year we had Martha Stewart who sells sheets, and now we have Ann Coulter who cuts eye holes in them."

Jewel said: "As a feminist, I can't support everything that’s being said up here tonight. But as somebody who hates Ann Coulter, I'm delighted."

"Gay men love Ann Coulter," she added. "It's because two minutes into hearing her speak, they remember why they hate p--sy."