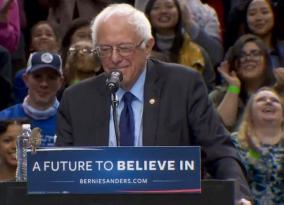 This after word that Clinton has teamed up with Hollywood A-lister George Clooney and his wife Amal Alamuddin Clooney for a fundraiser that will charge $33,400 per person for a chance to attend a dinner.

"It is obscene that Secretary Clinton keeps going to big money people to fund her campaign," Sanders said to CNN.

"But it's not only this Clooney event, it is the fact that she has now raised well over $15 million from Wall Street for her super PAC and millions more from the fossil fuel industry and from the drug companies."

The 74-year-old Vermont senator has openly refused lavish donations from a single party or lobbyists.

"I think what we are trying to do is run a campaign, to paraphrase Abraham Lincoln, of the people, by the people and for the people," he explained.

"Not just reaching out to billionaires and the wealthiest people in this country."

Sanders said by contrast his events only cost "$15 to 50 bucks."

If he can maintain the momentum, Sanders is hoping he can persuade these superdelegates to reconsider their loyalties to Clinton.