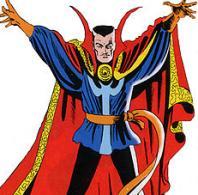 The 'Sherlock' star will tackle the role of Sorceror Supreme, a former neurosurgeon who is primary protector of Earth against magical and mystical threats.

The character, created by Stan Lee and Steve Ditko, first appeared in Strange Tales #110 in July 1963.

Joaquin Phoenix is said to have been in the running but that deal reportedly fell through after the sides couldn't agree on how many films Phoenix would have to sign on for.

The planned 'Doctor Strange' film is slated for release in 2016.