Benedict Cumberbatch Imitates Otters, Gets a Kiss From Depp on 'Graham Norton' 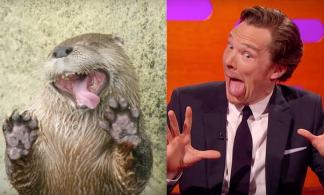 Benedict Cumberbatch was a good sport as he played along with an internet meme that compared him to an otter on 'The Graham Norton Show'.

After Norton showed some examples in side-by-side photos, the 39-year-old 'Sherlock' star tried to replicate more Otter expressions for the perfect photo.

"May I say one thing?," he quipped. “Someone has a lot of time on their hands."

But with his 'Black Mass' co-star providing better results than anyone could've expected in the first few photos, Depp was on board and even planted a kiss on Cumberbatch -- until the giant teddy bear entered the picture.