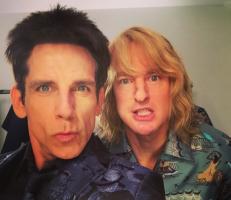 Ben Stiller and Owen Wilson took to the Valentino catwalk during Paris Fashion Week Tuesday in a surprise stunt to announce 'Zoolander 2.'

The stars reprised their roles as male models Derek Zoolander and Hansel from the 2001 cult favorite.

Following the show, Paramount announced that the sequel, written by Justin Theroux and directed by Stiller, would hit theaters on February 12, 2016,.

The film, which will be filmed in Rome, reportedly follows Zoolander's process of self-reinvention fifteen years after the first film.

The unexpected moment saw the audience immediately take out their phones to capture the walk.