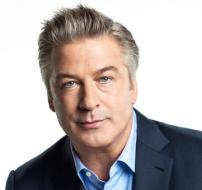 Baldwin, who does his infamous Trump impression on 'Saturday Night Live' nearly every week, says he used to know Trump before he became president and can't understand the man he's become.

"He used to be very playful and funny," he explains. "And then he... I don't know what's with him now since he won. I thought when he won he'd relax and be more generous."

"But seems like he won and acts like he lost. He's very bitter. It's inexplicable. I thought he'd really change his complete tone when he won and he hasn't."

And yes, if you wait for it long enough, Baldwin throws in an impression of the Commander in Chief.

Baldwin also talked about having had enough of the children's song 'Mommy Finger', which evidently has a very different meaning for Corden.