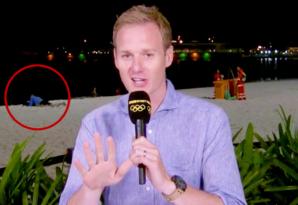 BBC reporter Dan Walker joked about an amorous couple caught behind him during his live Olympic broadcast from Rio de Janeiro.

Walker was all setup for a segment from Copacabana beach when the cameraman and viewers noticed the pair getting intimate on the sand behind him.

"For those asking what's going on in the background on social media now, we're not gonna zoom in, but rest assured, it's not that. It's just a hug," he smiled.

"We'll find out what the book is maybe a little bit later on. So, we're not gonna go any closer than that though."

"Just for clarification… they were reading a book!!! It's live TV," he later said on social media. "Anything can happen!"