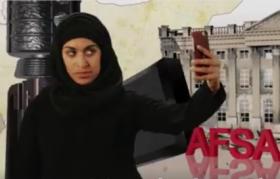 The BBC has sparked a bit of controversy with a 'Real Housewives of ISIS' sketch on its satirical comedy series 'Revolting'.

The skit, a spoof inspired by the 'Real Housewives' reality series, features British women in hijabs discussing life being married to members of ISIS.

The women model their suicide vests for each other and complain about having nothing to wear to the next beheading.

"Oh, babe, you look gorgeous!" says a friend, before she confesses to the camera that "she looked massive. You're gonna need a lot of Semtex to kill that one."

Some viewers described the sketch as "distasteful" for mocking a real problem while others applauded because "if you can mock something, you're not scared of it."

Watch the 'Real Housewives of ISIS' sketch below;