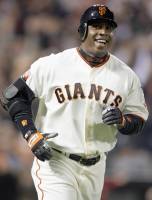 Former baseball player Barry Bonds has been convicted on one count of obstruction of justice, but a mistrial was declared on three counts of perjury after jurors couldn't reach an agreement in their fourth day of deliberations.

The jurors believe that the 46-year-old lied in his testimony to a grand jury in December 2003, claiming that his trainer never injected him with a needle. Bonds had been subpoenaed to testify before a federal grand jury investigating the distribution of performance-enhancing drugs to athletes from BALCO.

The testimony that led to the conviction came when a grand jury prosecutor asked Bonds if Anderson ever gave him "anything that required a syringe to inject yourself with."

Bonds told the grand jury that only his personal doctors "ever touch me," and he then evaded the subject.

"You know, I am sorry, but that -- you know, that -- I was a celebrity child, not just in baseball by my own instincts," he said. "I became a celebrity child with a famous father. I just don't get into other people's business because of my father's situation, you see."

Lawyers will meet in court on May 20 to decide whether a retrial will be required for the perjury counts and to set a date for sentencing. Sentencing guidelines recommend 15 to 21 months in prison, but it is thought Bonds may be able to serve his time in home confinement.

Bonds, who has long has faced speculation he used steroids, broke the record for most home runs in a single season back in 2001, with 73.