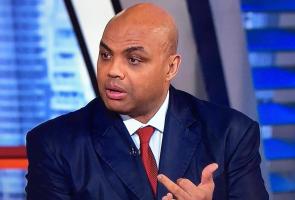 Charles Barkley is being slammed on social media after saying a photo of Boston Celtics player Isaiah Thomas expressing grief over his sister's death was "not a good look."

Thomas' younger sister, Chyna, was killed in a car accident over the weekend. Before the Celtics' Sunday night playoff game against the Chicago Bulls, Thomas broke down and cried on the bench with teammate and longtime friend Avery Bradley comforting him.

After TNT showed a clip of Thomas with Avery, Barkley remarked: "I'm not feeling comfortable with him sitting on the sideline crying like that. That makes me uncomfortable because that tells me he's not in shape to play."

"I don't know how this night is going to turn out. But to be sitting on the sideline a few minutes before the game, crying, that makes me uncomfortable for him. That's just not a good look, in my personal opinion."

Barkley was widely criticized and a handful even called for the popular commentator to be fired.

"So Isaiah Thomas crying because he lost his sister makes you uncomfortable? It's a bad look? Charles Barkley is a joke of human being," said one.

"Charles Barkley should be removed from broadcasting for the comments he made about Isaiah Thomas Sunday evening," commented another.

"Charles Barkley crossed the line with his comments about IT. No one deserves to be criticized about how they deal with a loss of a loved one."

Although the Celtics ended up losing to the Bulls, Thomas scored 33 points.