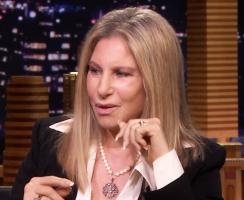 Barbra Streisand says sexism has cost her multiple Oscar nominations over the years.

Streisand told director Robert Rodriguez at the Tribeca Film Festival in New York that people didn't want to recognize her efforts because she was a woman, according to Variety.

"There were a lot of older people. They don't want to see a woman director," she said.

And it wasn't just older men, Streisand added: "I don't know how many women wanted to see a woman director."

Streisand's 'Yentl', which she also starred in, was nominated for five Academy Awards in 1984. She missed out on the Best Director and Best Actress nominations she was hoping for and the film ended up winning just one Oscar for its music and score.

But despite being named as Worst Actress for her performance during that year's Razzie's, Streisand claimed some female critics didn't want her to succeed.