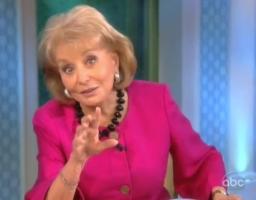 Barbara Walters tells Jimmy Fallon about her 10 Most Fascinating People special and crushes the host's ego by telling him he's not really fascinating.

Walters also reveals that her most boring interview was Warren Beatty.

The two hour special was broadcast on Sunday night and the full list was: Scarlett Johansson (photos