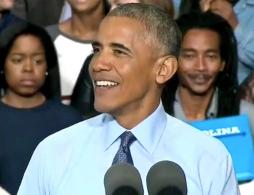 Barack Obama is enjoying some downtime after eight years in the White House and he appears to be relishing every minute of it.

In a video shared by Sir Richard Branson, the former President of the United States goes head to head with the Virgin founder after learning kitesurfing.

"Being the former president of America, there was lots of security around, but Barack was able to really relax and get into it," Branson wrote on his official website.