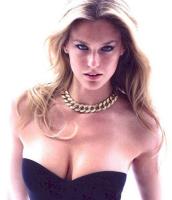 ), who was Sports Illustrated's swimsuit cover girl three years ago, says she was left feeling violated after a recent airport security pat down.

'I got a security 'pat down' by a woman at the airport that made me feel very uncomfortable and left no doubt about her sexual preferences," Refaeli complained on Twitter.

The model was in London all week but didn't specify whether the incident took place at Heathrow airport -- known for its tight security.

Meanwhile, Jennifer Hudson also apparently isn't a fan of the procedure after she was photographed sticking her tongue out and scrunching up her face during a TSA pat down in Los Angeles.

At least neither had it as bad as Cheryl Burke (photos

). Last year, the Dancing the Stars pro complained. "I think I might have just gotten fingered by a TSA agent!"