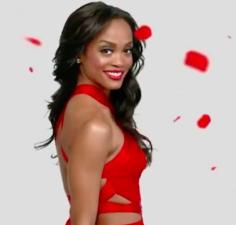 'Bachelorette' Rachel Lindsay didn't mince words after discovering one of her suitors on the reality series already had a girlfriend.

It all began when a woman named Lexi came up to Rachel and introduced herself on the episode as DeMario's girlfriend. She told Rachel they had been dating for seven months when he suddenly stopped answering her texts and calls.

She later became furious after discovering that it was because he was one of the contestants.

Confronted with this information, DeMario pretended not to know Lexi at first and called her a "psych." He then claimed the extent of their relationship was just having "sexual intercourse" and didn't want to discuss it on-camera because it was "some personal life stuff."

He went on to claim that they had broken up before he came on the show but Lexi's text history quickly put an end to that.

Despite that, DeMario insisted "I definitely want to be here" but Rachel wasn't having any of it.

"I'm not here to be made a joke of, which is what I feel like you're doing right now with me, so I'm really going to need you to get the f**k out. I don't like being f**king embarrassed, and I can't even look at you right now."

That apparently sent DeMario packing but he appeared at the end of the episode for one last conversation with Rachel as a cliffhanger for next week.