'Bachelorette' Contestant's Girlfriend Shows Up And Throws Rocks At 'Jerk' 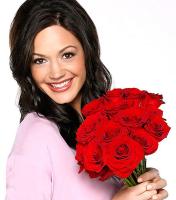 A week after 'Bachelorette' contestant Brian talked about being on the show for "the right reasons," his girlfriend showed up to ruin his chances.

Stephanie, who apparently thought her boyfriend was merely going away on a trip, confronted Brian for being on the show and ended their surprise meeting by throwing rocks at him.

Brian was then escorted out by production security.

Host Chris Harrison tells TV Guide: "The thing about our show is that sadly it's not predicated on the fact that everyone is honest and true. We're hoping to find 25 great guys, but that's life and this is the bullsh-t people deal with trying to date."

"I knew he was completely full of sh-t when she (the girlfriend) had the exact dates of our production because he told her, 'I'm going on this day and I'm finishing on this day.'"

" And this girl isn't Meryl Streep; you don't come up with that kind of emotion. People didn't see, but even before she walked in she was bawling, saying, 'I don't know if I can do this, I don't want to see him.' I was proud that she found the courage to purge herself for 30 minutes on this guy."

"He finally admitted they slept in the same bed the day before which basically means that the morning he left he was in bed with another woman, got up, grabbed his bags and came on to The Bachelorette."

"She was just duped, and to her credit they were taking a bit of a break, but she thought it was so he could 'better himself,'" he says.