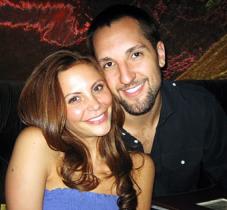 More details are coming out about the death of Bachelor' contestant Gia Allemand, who was dating NBA Pelicans player Ryan Anderson.

An incident report from the New Orleans Police Department reveals that the 29-year-old dance instructor had been fighting with her boyfriend hours before she used a vacuum cleaner cord to hang herself from the stairwell of her home.

Anderson told police that the two had been arguing "over her suspicions that he had been unfaithful to her."

He says as he was dropping her off, she told him that she still loved him, but he said "I don't love you anymore."

About an hour and a half later, he got a call Allemand's mother who was concerned because she was on the phone with her before the line suddenly went dead.

Upon arriving at the home, Anderson found Gia unconscious on the step of the staircase with the cord wrapped around her neck many times. He unwrapped the cord and called for help.

Police also found a handwritten note on the dining room table that only said "Mom gets everything."

She was alive when taken to hospital. However, she was taken off life support because "a critical loss of brain and organ function, life support was withdrawn" due to the suicide attempt.

Since her death, Anderson has called Gia Allemand the "most beautiful person I knew inside and out."