'Bachelor' Contestants Who Fell In Love With Each Other Defend Relationship 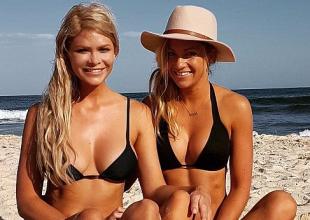 Two female 'Bachelor' contestants who fell in love with each other instead of the man are defending their relationship.

Megan Marx and Tiffany Scanlon competed on the Australian version of 'The Bachelor' to win Richie Strahan's heart.

However, after they were both sent home, the women started dating each other instead. The pair claim they had an instant connection after meeting on the first night of 'The Bachelor'.

They're being criticized in the country for fabricating their romance for publicity but the couple claim it's true love.

"I think without people knowing us, and seeing us together, it can all seem a bit 'too good to be true,'" explains the 27-year-old Marx. "Some people can be fairly negative, but there is also so much support so we are trying to focus on that."

"Usually we just say, 'OK, you can think what you like.' I don’t have the time of energy to spend trying to convince the critics that we are together," adds Scanlon. "It just makes me sad that we live in such a cynical world where a lot of people choose to believe it is a lie rather than having trust and faith in that it is the truth."

"I love Megan so much and I’m excited to share that love with Australia."

Marx says she hopes their story will change views: "I'm feeling really proud, but also hoping it might change some people's attitudes about same-sex relationships."