Aziz Ansari: Donald Trump 'Makes Me Afraid for My Family' 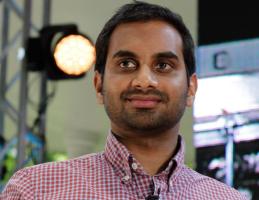 In an op-ed piece for the The New York Times, Aziz Ansari says Donald Trump's rapid rise has him fearful for his Muslim family.

The comedian says he told his parents "don't go anywhere near a mosque" and "do all your prayer at home."

"I am the son of Muslim immigrants. As I sent that text, in the aftermath of the horrible attack in Orlando, Florida. I realized how awful it was to tell an American citizen to be careful about how she worshiped," he writes.

"Being Muslim American already carries a decent amount of baggage. In our culture, when people think 'Muslim', the picture in their heads is not usually of the Nobel Peace Prize winner Malala Yousafzai, Kareem Abdul-Jabbar or the kid who left the boy band One Direction."

"It's of a scary terrorist character from 'Homeland' or some monster from the news."

"Today, with the presidential candidate Donald J. Trump and others like him spewing hate speech, prejudice is reaching new levels," he says. "It's visceral, and scary, and it affects how people live, work and pray. It makes me afraid for my family. It also makes no sense."

Ansari tries to use some math to quell fears.

"There are approximately 3.3 million Muslim Americans. After the attack in Orlando, The Times reported that the FBI is investigating 1,000 potential 'homegrown violent extremists', a majority of whom are most likely connected in some way to the Islamic State."

"If everyone on that list is Muslim American, that is 0.03 percent of the Muslim American population. If you round that number, it is 0 percent. The overwhelming number of Muslim Americans have as much in common with that monster in Orlando as any white person has with any of the white terrorists who shoot up movie theaters or schools or abortion clinics."

"The vitriolic and hate-filled rhetoric coming from Mr. Trump isn't so far off from cursing at strangers from a car window. He has said that people in the American Muslim community 'know who the bad ones are', implying that millions of innocent people are somehow complicit in awful attacks."

"Not only is this wrongheaded; but it also does nothing to address the real problems posed by terrorist attacks. By Mr. Trump's logic, after the huge financial crisis of 2007-08, the best way to protect the American economy would have been to ban white males."

"Since 9/11, there have been 49 mass shootings in this country, and more than half of those were perpetrated by white males. I doubt we'll hear Mr. Trump make a speech asking his fellow white males to tell authorities 'who the bad ones are', or call for restricting white males' freedoms."

Ansari then weighs in on the gun debate, saying: "Suspected terrorists can buy assault rifles, but we're still carrying tiny bottles of shampoo to the airport."

"Xenophobic rhetoric was central to Mr. Trump's campaign long before the attack in Orlando," he continues.

"Numerous times, he has said that Muslims in New Jersey were cheering in the streets on Sept. 11, 2001... I don't know what every Muslim American was doing that day, but I can tell you what my family was doing... My family, unable to reach me on my cellphone, was terrified about my safety as they watched the towers collapse. There was absolutely no cheering. Only sadness, horror and fear."

"Mr. Trump, in response to the attack in Orlando, began a tweet with these words: 'Appreciate the congrats'. It appears that day he was the one who was celebrating after an attack."